Exception handling due to Workflow await

we have observed following behaviours when the workflow is in the await status, that means when Workflow.await is called with a time out variable.

1.) On the one hand we have an exception when the time out is reached but the application went down before. When the application/pod is then restarted, we have following exception in the console during startup:

Have you any idea how to catch this exception during startup and terminate the workflow, because the workflow itself is stuck and doesn’t respond anymore and stays in the running status. 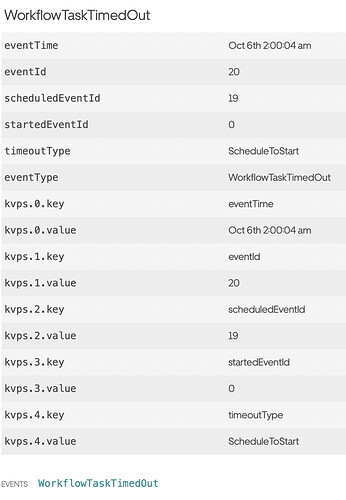 Same question as before. How can we avoid this issue? Due to current development requirements we have no TimeOut set at all. Of course this is not recommended, but currently necessary in out dev phase.

Are you calculating the workflow.await duration based on the System.time?

NonDeterministicException is not propagated to the workflow code, see:

It is worth reading this as well

@maikdrop are you on the recent version of the Temporal service and the SDKs? I believe the issue with the “ScheduleToStart” timeout after a long delay was addressed already.

that’s a valid point. Our versions are not up to date. Ok, we will update the SDK and the Temporal version. After I’m going to to try to reproduce the described issue again. Thx

1.) The await duration is calculated based on a dateTime entered by a user in the Front End. It’s currently always the end of day of the entered date. This date is stored in a DB entity. And this entity is put into the workflow.

2.) Yes, this is how it should be. But the worker is doesn’t pickup the workflow task. Instead we get an exception. I haven’t documented it, but I think we have a io.temporal.worker.NonDeterministicException as well.

would you recommend to update to the recent version v1.18.2 or a previous one? It was released yesterday.

From the error you have shared, it looks like you have a Workflow.await/sleep (duration) followed by an activity invocation. The workflow code is executed, and it records a TimerStarted event in the Event History. Then, on replay, the value of duration is calculated again with a value <= 0. The SDK replays the Event History and it expects to find an ActivityTaskScheduled event instead of a TimerStarted event.

1.) It’s calculated in a deterministic way. The input date comes from a DB entity, which gets the time from a user input.

2.) The WorkflowTaskTimedOut is shown via Temporal WebUI. And I’m not to 100% sure, which exception was shown in the application console. But I’am pretty sure that there was an output. But unfortunately I haven’t documented it.

For 1.
Is fun getDateTimeFromEndOfDay called directly in your workflow code currently? If so I would move it to SideEffect or local activity (prob better side effect) and use result to pass as duration to Workflow.await/sleep. This way it will be recorded in workflow history and on
workflow replay (which happens when you shut down your worker(s) and they come back up) it would not be calculated again and the recorded result used instead.

produces a different event history if n<=0 and when n > 0
which we believe leads to the non deterministic error you pasted.

Yes it’s calculated in the workflow. What do you mean with

move it to SideEffect

Thanks for the explanation!!!

What do you mean with move it to SideEffect

How do you create the date argument passed to getDateTimeFromEndOfDay. If you create it from Workflow.currentTime then it should be deterministic.

We have a DB entity, which has a time property. The value of this property was entered by a user in the front end. The created entity is put into the workflow and the time property is the input of getDateTimeFromEndOfDay.

" is put into the workflow "

Is it passed as a workflow argument? Then it should be deterministic.

Yes, it’s passed as an argument to the workflow.

I’m not sure if this is deterministic if worker’s time zone changes. I would look through your code for other sources of non determinism.