Could I know the significance of taskQueuePartitions in presence of high load on a single task Queue?
From @maxim ’s talk on How to Design a workflow engine from first principles, I inferred that a single task queue must reside on a single shard (which is why local transfer queues exist…to transfer all the tasks from individual shards to the central shard housing the task queue under question), Because if the task queue is spread across multiple shards, then fanout increases, time taken to fetch tasks from all the shards for the given task queue increases.

EDIT: Tuning Temporal setup for better performance - #2 by maxim , Our issues are essentially the same as the one posted in this post.

I think there is some terminology confusion. Temporal history service divides workflow id space into numHistoryShards shards. Each shard contains a transfer queue. This queue implements an outbox pattern as tasks are inserted into it using the same transaction that updates the workflow state.

Task queues are maintained by the matching service. They are partitioned independently. By default, each task queue uses 4 partitions.

When an activity or workflow task is scheduled, it is first added transactionally to the shard transfer queue. Then the task is consumed from that queue and pushed to the matching engine. The choice of which partition to push a task is based on the task id and is completely independent of the history service sharding logic.

No. Shard is the history service concept. Partition is the matching engine concept.

On average, you expect 100 tasks per second per task queue partition. This heavily depends on the service and DB hardware.

They are absolutely independent.

It can handle certain throughput per host. If multiple partitions that share the matching host don’t overload it then it is OK. The number of matching hosts should be proportional to the total traffic across all task queues.

Yes, only task queues that need to support high traffic (over 400 tasks per second) need the increased number of task queue partitions.

Thanks @maxim , clears up a lot of things.

Yes, only task queues that need to support high traffic (over 400 tasks per second) need the increased number of task queue partitions

Could you point us to how to achieve this? I was of the opinion that dynamicConfig set at the server level applies to all task queues in the system (across all namespaces).

On average, you expect 100 tasks per second per task queue partition.

Could you point us to how to achieve this? I was of the opinion that dynamicConfig set at the server level applies to all task queues in the system (across all namespaces).

For certain dynamic config properties such as task queue read/write partitions you can define constraints, in this case namespace and task queue names, for example:

same would apply for matching.numTaskqueueReadPartitions.

Just note that to increase the number of partitions (on running cluster), first increase numTaskqueueReadPartitions and then numTaskqueueWritePartitions. If you want to decrease, do it in reverse of that.

is there any downside to increasing task queue partitions

Yes you can have too many partitions, typical recommendation for even larger loads is to increase default to 8 or 16 (no more).

Slightly confused with the 8 to 16 limitation of task queue partitions.

On average, you expect 100 tasks per second per task queue partition.

Perhaps I am banking too much on task queue partitions to achieve this scale. Are there any known alternate ways?

You have to configure 100 partitions to support 10k tasks per second.

After bringing down partitions from 128 to 8, after taking into account @tihomir’s suggestion, I did see some improvements… 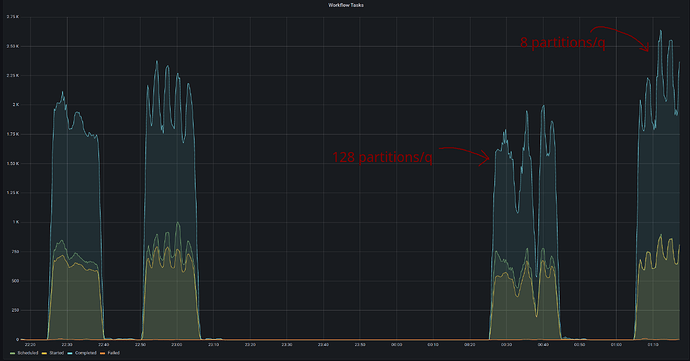 @maxim could you shed some light on why the disparity?

Slightly confused with the 8 to 16 limitation of task queue partitions.

Yes, is “typical” recommendation and not a hard one.

That many paritions would require a lot of worker polling threads to be saturated. So when you reduced the number of partitions, you improved the matching engine performance for the number of poller threads you specified.

I see. So then workers aren’t really allowed to scale independently of the temporal cluster services(incl cassandra) ? Too many workers increase the polling threads and deteriorate matching engine performance. Is that correct?
I guess when it comes to it, we have to use rate limiting to prevent workers from bombarding the cluster.
Looking for a way where other teams (who develop workflows) can safely scale up or down the workers that they manage, without knowing about central cluster internal configs. Is there any other parameter apart from rate limiting that can aid this?

Too many workers increase the polling threads and deteriorate matching engine performance. Is that correct?

Your workers poll frontend service so yes you would need to think about rps limits of frontend and downstream services (history, matching):

Is there any other parameter apart from rate limiting that can aid this?

Sync match rate and task_schedule_to_start_latency (server metric) are good indicators of unprovisioned workers. This along with (sdk metrics) workflow and activity task schedule to start latencies and your worker cpu/mem utilization can give you indication if you need to scale number of workers and/or increase number of workflow / activity task pollers.

That many paritions would require a lot of worker polling threads to be saturated. So when you reduced the number of partitions, you improved the matching engine performance for the number of poller threads you specified.

The matching engine performs the best when each partition has enough waiting polls for each new task to be matched immediately. If the number of pollers is insufficient, then tasks have to be stored in DB and forwarded to other partitions, increasing matching latency and throughput. As a single portion can support at least 100 tasks per second, there is no need to have more than 4-5 partitions for 400 tasks per second.

However, the results are the same at 4K shards and 8K shards. We expected the performance to increase with more shards. We are indeed maintaining ~512 shards per history node, so appropriate scaling is being taken care of.

Is there an explanation to why increasing shard count does not yield performance improvement?

Will keep this in mind when we will have two task queues for a workflow - one for its workflow tasks, and one for its activity tasks.

Also, doesn’t sticky execution Tasks | Temporal Documentation ensure that activity tasks of the same workflow execute on the same worker IF the worker had registered with all the activities of the said workflow?

No, sticky execution is only for workflows. For activities, you have to use sessions for go or create per host-specific task queue yourself for all other SDKs. See the fileprocessing sample by the SDK of choice.

s using the same task queue a bad practise, or perhaps a performance deterrent? It was easy and intuitive so far to provide just one task queue for a given workflow definition.

It is never a single task queue. When you create a worker for a task queue that hosts both workflows and activities, then at least 3 real task queues are created. Two with the same name as the task queue name passed to a worker. One for activity tasks and one for workflow tasks. And another host specific one for the sticky workflow tasks.

I believe dynamic config allows overriding partitions per task type, not only name.